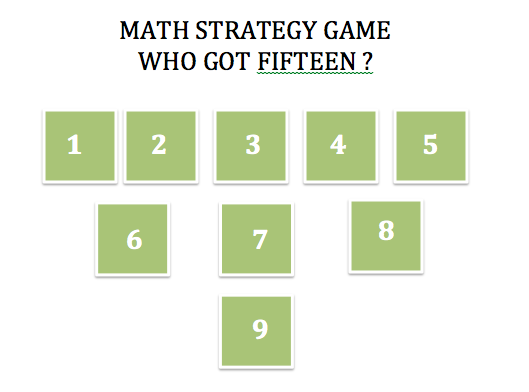 Who got Fifteen is a simple math game of addition which you can play anywhere anytime, while waiting at a restaurant or while on the go. All you need for this game is a paper and a pencil. Though this game only has simple additions to do but it can keep you captivated for long.

Can you figure out what can be the strategy here.

Let’s give it a try.

So, what is the strategy here ?

The three rows,  the three columns and the two diagonals of the magic square sum up to 15 each. So, basically, you are playing Tic-Tac-Toe on the magic square. And it doesn’t matter, which player starts first.

Have your kids pick up their favorite book. Look f

How will you approach this problem to solve it in

What do you get when you mix books and kindness ?

Math Art bridges the gap between mathematics and a

Kids are not born with good manners. It is a learn

If you are like me, you can never have too many bo

Isn’t’ it fascinating to watch the big golden